An Unforgettable Day at the Tour de France 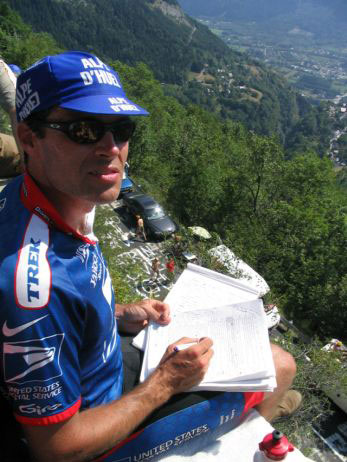 In July of 2003 one of my dreams came true. I sat, dangling my feet over the twenty-one famed switchbacks of Alpe d’ Huez while making revisions to the manuscript that would eventually become The Race.

It was a blistering hot day. The atmosphere was electric as I waited, along with half a million others, for the world’s best cyclists to arrive. Would Lance Armstrong be able to take control of the race as he had for the past four years when the roads bent up? There were signs that that might not be the case this time around. What happened next, neither I nor any of the other people there were prepared for. We were about to experience one of the most legendary moments of cycling history!

As the helicopters rounded the bend at Bourg d’ Oisans, my brother-in-law and I peered down to the valley below. Those tiny specks rushing toward the mountain were the best pro cyclists in the world. They were too far away to tell who was who, even with binoculars, but there could be no doubt that the attacks were coming fast and furious.

As we watched the cyclists approach, it became increasingly obvious that this was no ordinary day. Whatever mystique Armstrong had held over his competitors was shattered. For the first time in his reign, his rivals believed he was beatable. Their attacks were relentless, one after another. Each time Armstrong and his only remaining teammate, Roberto Heras, neutralized one man, another would go. Eventually Iban Mayo broke away for good.

By the time Armstrong’s group traveled the section of road one hundered feet below our dangling feet, the crowd had been whipped into a frenzy.

When the cyclists passed my position, I couldn’t keep my feet still. I ran alongside Armstrong, cheering. That’s me at the far right wearing the Postal kit and the 2002 Salt Lake Olympics beret. The clothing was a last second purchase brought on by the intensity of the experience. The beret was in combination homage to my home town and to France. 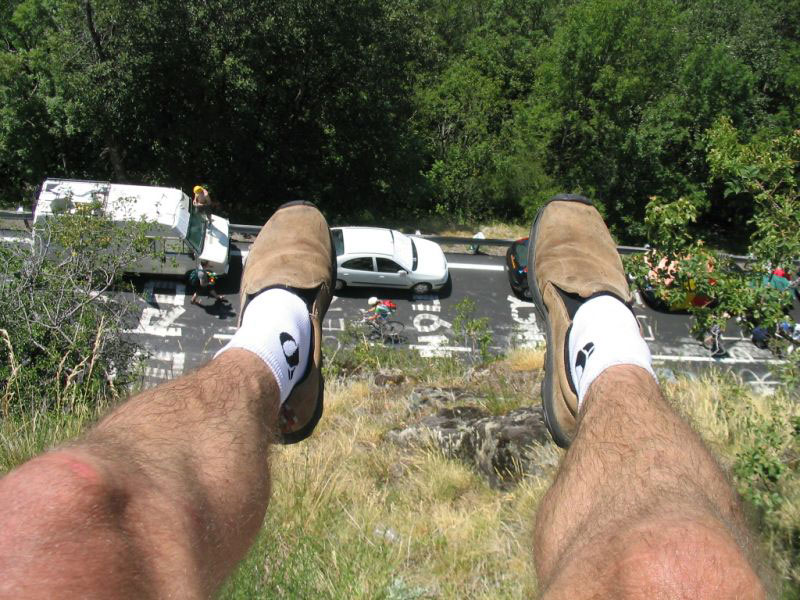 Just ahead of me you can see Roberto Heras, his left knee bloodied from a crash where he and Armstrong got tangled on the frenetic lead-up to this climb. Roberto later became the leader of the Liberty Seguros team, and another in a line of Armstrong teammates who decided to take him on.

Right behind Lance is Joseba Beloki. One day after this shot was taken he became the victim of a spectacular crash where melting pavement ripped his tire from the rim. He’s never recovered the form he had before that accident. You might recall Lance narrowly avoided piling into him by swerving into a mown field, then jumping off his bike and leaping over a ditch (what an incredible moment). The divergence of these two careers is a dramatic illustration of the knife edge elite cyclists must balance on to separate success from disaster.

Behind Beloki is Tyler Hamilton, completing the race with a broken collar bone suffered on Stage One. You can see the brace he’s wearing. I’ve had a broken collar bone myself. No way would I have ridden a bike before it healed. I don’t know how he endured the pain. What a stud! To top it off, later on in this Tour Hamilton won a stage on an epic solo breakaway. Absolutely incredible.

You can see Haimar Zubeldia’s right eye between Beloki and Hamilton. Roberto Laiseka is in the orange jersey just behind him. As I mentioned earlier, Iban Mayo, is the only man up the road. All three compete for the Euskaltel-Euskadi squad. This little regional team often exceeds expectations, and they sure did on this day. How do the Basques produce so many great climbers? 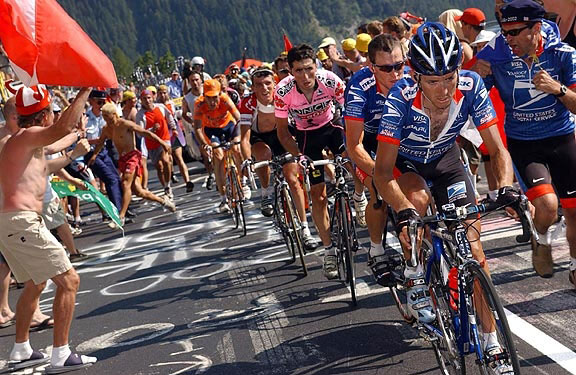 Last in the group, only the left side of his head and shoulder visible, is the amazing Alexander Vinokurov, a man who eventually took second on this stage and third in the 2003 Tour. He proved that his tactical instincts are among the best in cycling.

I ran alongside Armstrong for about a hundred yards. It’s mind boggling how fast the pros go. Like so many of the other remarkable moments in my life, I didn’t realize that I was doing novel research at the same time. Sure, this was the first time I had ever spoken directly with Armstrong (although for some reason, he didn’t speak back), but that wasn’t the critical thing. Shortly afterwards I wrote a nearly exact description of this encounter into the novel, The Race. If you’ve read it, I assume you can recognize the scene. I’d love to hear what you thought. Contact me by clicking here.

As I stood there, at least a few hundred yards from where I started, I felt overwhelmed by the moment, almost more so than any other event in my life. Only the birth of my daughters exceeds it. The reason was that dreaming of this experience (which didn’t yet exist) had convinced me to write a novel, work like a madman to get to France, cycle up this hill, and actually experience an even better moment than I’d ever dreamed of. What an amazing experience to be arms length from the competitors during the heat of battle. Try this during the Super Bowl. It might get you five to life. 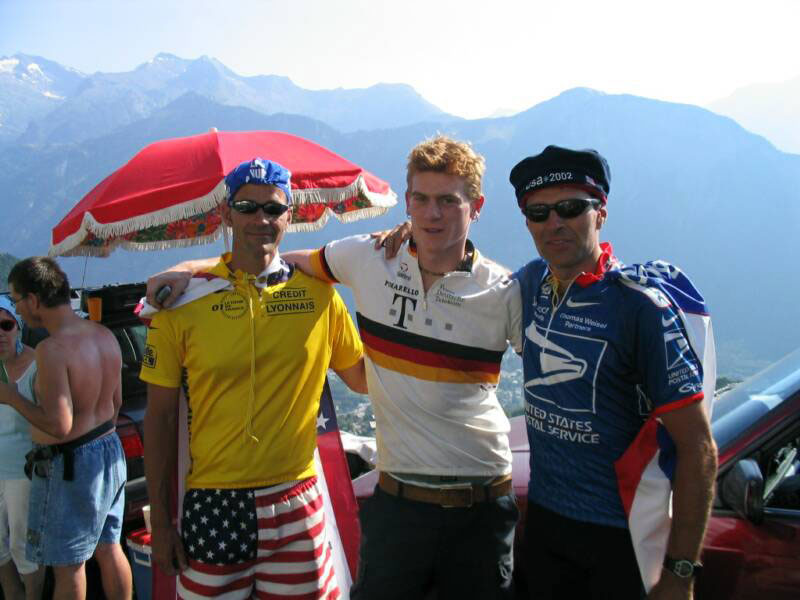 Steve Horton (my translator and brother-in-law), Andy (a German fan we met that day), and me on Alpe d’ Huez. Though they may be cheering on different favorites, the vast majority of the fans hold all of the athletes in high regard. After all, these fans have ridden this hill themselves and can appreciate the super-human effort required to do it as fast as the pros.

As I stood there, catching my breath, I wished I had a photo to remember the event. Unfortunately, even if one of the many spectators had taken a shot, how would I ever get a copy. Most of them didn’t speak English, and it made little sense to try to question them while the race was still progressing anyway. Once the race ended, the potential holders of my dream photograph scattered like leaves in the wind.

Then, several months later, I was doing research on getting The Race published. I noticed a book by Graham Watson and decided I’d try to get in touch with him to ask if he could give me advice on approaching his publisher. I found one of his pages on the Internet, and that led to a page of photos of the Tour de France on Alpe d’ Huez. As always, he had selected about a dozen photographs out of the hundreds I’m certain he shot on that day. My jaw dropped to the floor when I recognized that one was of me. Not only was it the photo I’d dreamed of owning, but it was taken by one of the world’s premier cycling photographers. He had apparently been shooting film from the back of a motorcycle, just a couple of yards up the road!

I purchased an enlargement for my home and have enjoyed re-living the experience as I show it to visitors. I hope you have enjoyed learning about it as well.
Tailwinds,
Dave Shields