On the afternoon of April 4, 2006 twenty-three year old pro cyclist Saul Raisin charged toward the finish line of a European tune-up race in preparation for his first Grand Tour, the Giro d’Italia (Tour of Italy). Meanwhile in Dalton, Georgia, Saul’s parents waited for the simple but comforting text message he always sent to let them know he’d finished the day’s stage safely: “OK.”

Through urgent phone calls the Raisins learned their son had crashed, fallen into a coma, and would require emergency brain surgery. They rushed to Europe where they learned that Saul’s doctors didn’t expect him to survive. If he did make it he’d be paralyzed for life. In shock, the Raisins discussed their options, including donating their son’s organs. Then he began to wake.

Prior to his crash Saul was in the process of building an impressive racing resume. He’d won the Best Young Rider jersey at the Tour de Georgia, captured ninth place overall at the Tour of Germany, turned in the strongest American performance at the 2005 World Championships, and won a mountainous stage in the first race of 2006. Trainers were in awe of his early-season strength.

After the crash that strength paid huge dividends. Tour de Life is the story not merely of Saul Raisin’s miraculous return to life, but of the awe-inspiring resumption of his quest to win cycling’s most prestigious race, the Tour de France. 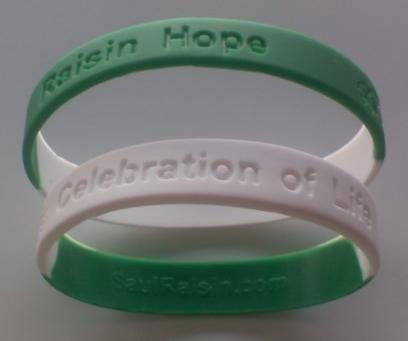 Saul’s Raisin Hope bracelets are $3. All of the proceeds go to the Raisin Hope Fund to benefit brain and spinal cord injuries.

As a teenager Saul Raisin was teased because of his curved spine. He responded by standing unusually erect for someone with his condition and training incredibly hard on his bicycle. It wasn’t until he reached the elite level of cycling that tests revealed this unique combination of factors had produced an amazing result: Saul’s lungs had double the normal capacity and his heart approached three times the average size. He’d effectively turned a significant social challenge into a major physiological advantage.

Before his crash, Saul Raisin was on the road to becoming America’s next cycling phenomenon. Now he’s one of more than 5.3 million people in the United States who are living with disability as a result of traumatic brain injury. That hasn’t stopped him from believing he can win the world’s toughest bicycle race, the Tour de France. Now others are starting to believe him, too.

Check out this page for a look at Saul’s cycling results.